MDT Ep. 98: Concerning the Life of Elgar the Hermit and Divine Dinner Delivery

On this episode, we get cozy for the holidays with a visit to the humble abode of Elgar, Hermit of Bardsey Island. Just don’t mind the visiting spirits or food-delivering eagles.

Image: Photo of the current binding of the Book of Llandaff (Wikimedia Commons).

We kick off a miniseries of texts from medieval travelers by continuing with Gerald of Wales as he sets out to tour Wales with Archbishop Baldwin, collecting stories from the region and getting involved in a few escapades of his own. 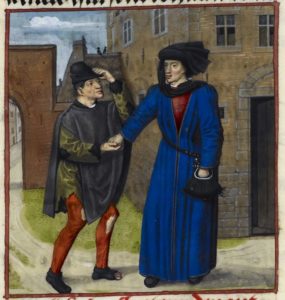 We’re back for some late summer episodes with a look at how medieval authors cozied up to potential patrons, with a specific look at Gerald of Wales. Coincidentally, we also announce our Patreon campaign! You can support us at www.patreon.com/mdtpodcast/ and get an audiobook of Jordanus’s Wonders of the East.