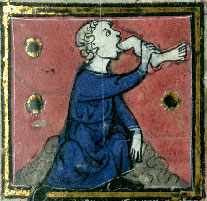 Today we plunge into some hard-core scholasticism, as we hear Thomas Aquinas wrestle with the thorny question: “If all dead bodies are resurrected at the Last Judgment, what happens to the bodies of cannibals, whose bodies are made up of the flesh of those they have eaten, who also need to be resurrected?” We also wrap up with a reflection on George Romero and the zombie apocalypse.
Today’s Text:
References: